tools of the trade 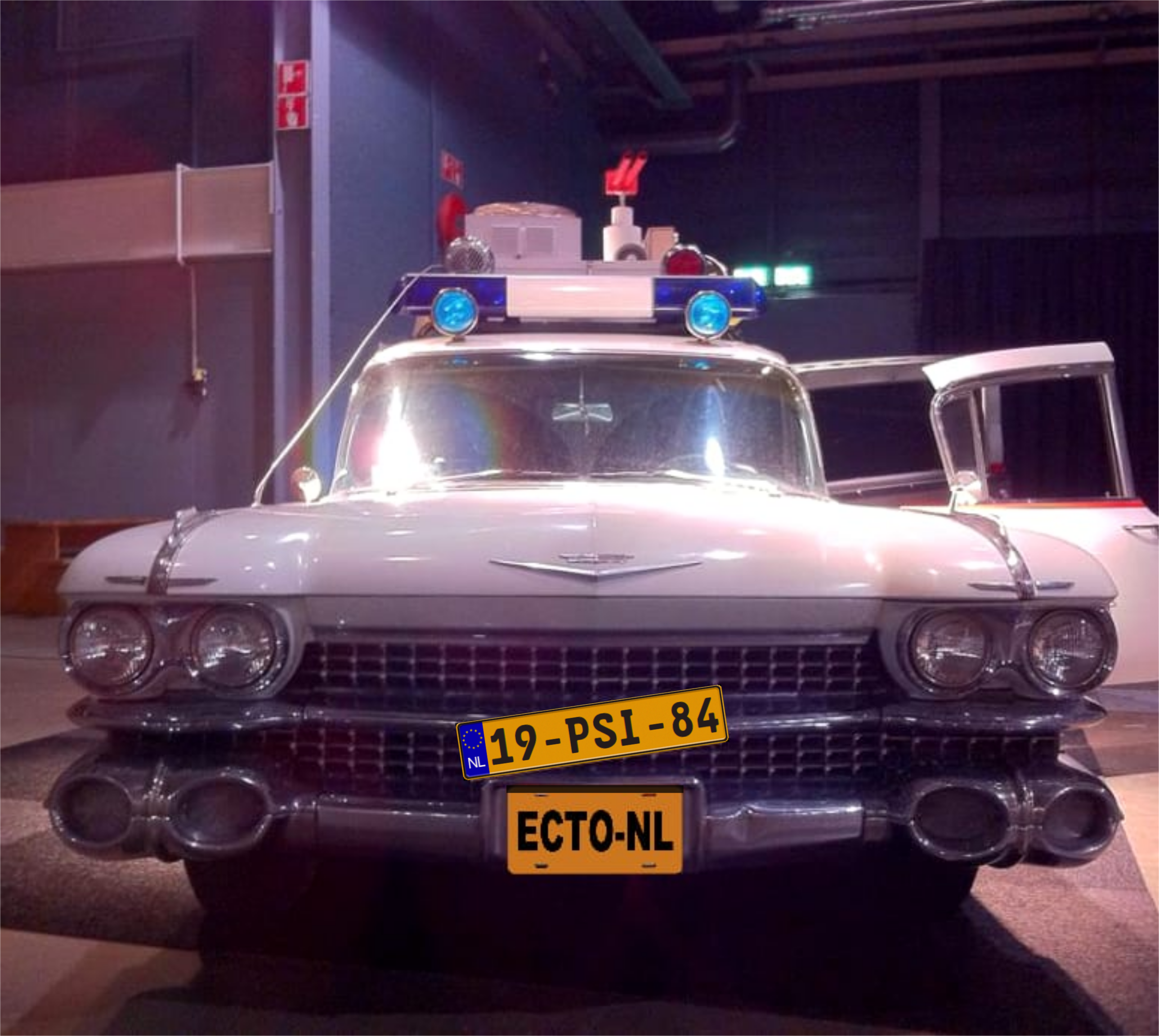 The Ecto-NL is a unique company vehicle , combining a sturdy 1950's frame (chassis + body) with a classic look, together with the most recent patented technologies for detecting and removing paranormal pests. In the context of durability and government policy (in line with guidelines of the Netherlands Environmental Assessment Agency), our company vehicle has been retro-modded, thereby combining recognisability and efficiency as optimally as possible.

The Ecto-NL offers ample space for four fieldworkers, as well as a broad range of necessary detection, research, and control equipment. Our Ectomobile's most striking feature—in addition to the characteristic siren—is the extensive equipment collection on its roof: Both front and rear show a double set of blue rotating lights (an exception to the official 2009 regulations for the use of emergency light and acoustic signals),  with the area in between filled with PKE detection and analysis equipment aiming for high as well as low bandwidths, a microphone for electronic voice phenomena, and of course the aforementioned trademark siren. 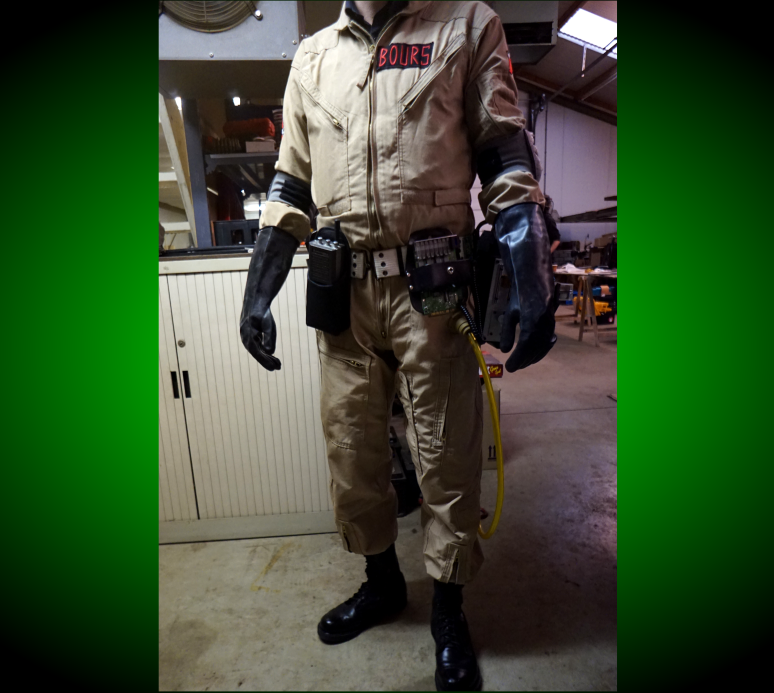 The high recognisability of a member of Ghostbusters NL is largely due to the more than famous Ghostbusters uniform. Even though minor varieties exist within the larger Ghostbusters franchise, uniformity is still extremely strong.

Ghostbusters make use of an adapted CWU-27/P coverall as used by the U.S. Airforce, or at least a similar variant made of the same material (i.e. Nomex), which offers a high degree of protection against certain chemical, radioactive, and ectoplasmic substances. Added to this are a army-style pistol belt, sturdy leather jumpboots (Corcoran jumpboots are most sought-after) and elbow pads. The element that completes the uniform—and leaves no doubt as to identity—are the name badge on the wearer's left chest and (in our case at least) the Ghostbusters NL logo on the left arm. 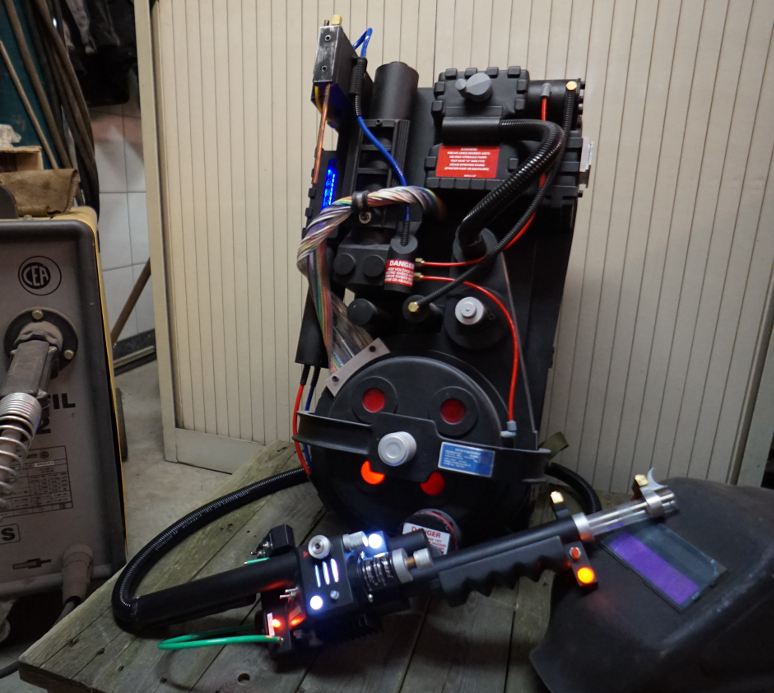 Together with the ghost trap, discussed below, the proton pack is the most essential tool of all the equipment Ghostbusters NL uses. Developed by drs. Spengler and Stantz of Ghostbusters Inc. headquarters in New York, the proton pack is a patented portable particle accelerator that uses positively charged ions to generate a plasma beam with which ectoplasmatic creatures and most other supernatural entities can be weakened and caught mid-air in some kind of plasma lassoo.

The two main components of the proton pack are the back unit, where the proton stream is generated, and the accompanying particle thrower, also called proton gun or neutrona wand. Basically, the latter is nothing more than a kind of plasma gun; it is hand-held when the fieldworker in question is in the process of catching a ghost but, depending on how quickly the ghostbusters needs to hold the wand, can either be attached on the right-hand side of the backpack or, alternatively, be attached to a special holster included on every fieldworker's accessory belt (also see uniform).

The plasma stream spouting from the proton gun follows a rather free sinus-wave pattern, which can modified somewhat as per intensity and reach. In order to meet health and safety requirements, current proton packs come with additional built-in safety features. 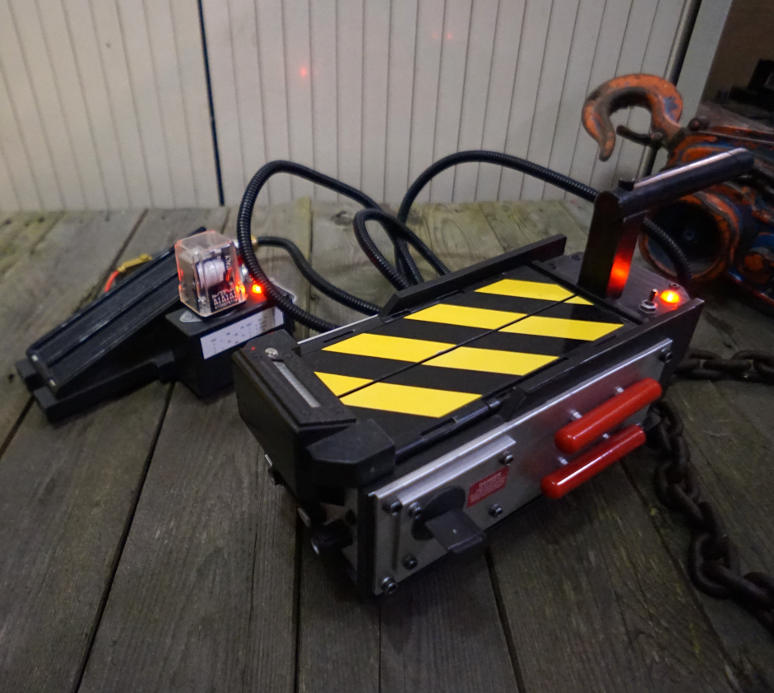 The Muon Trap—often referred to as simply 'ghost trap' or even just 'trap'—is an extremely secure, portable container used to enable us to transport contained entities to a more permanent storage facility. Considering its limited battery capacity, ghosts are not supposed to be contained in the trap for an extended period of time.

A remote-control foot-pedal activation unit, connected to the trap via a 10 ft. cable, is used to open and close the trap at a safe distance. The process of sucking the negatively charged ions as well as the significant amount of psychokinetic energy takes an incredible amount of energy. A positively charged laser protection grid is then activated to ensure that the ghost remains securely contained in the trap. 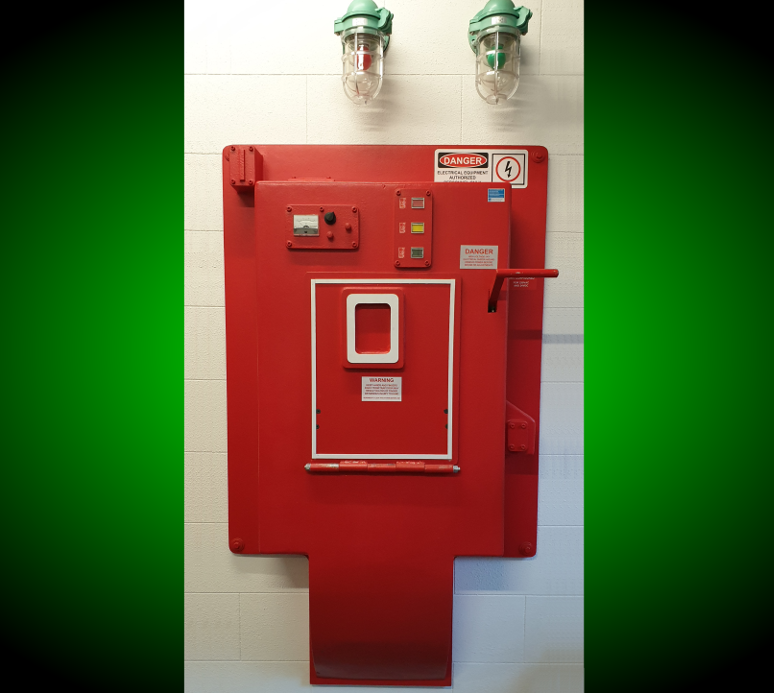 De Ecto Containment Unit, or E.C.U. for short, is a technically rather complex container built into Ghostbusters NL-headquarters. It has a containment grid that is based on laser technology, like in our portable muon traps (see above) except on a larger scale. Only GBNL fieldworkers who have fully (and succesfully) completed their training are allowed to operate the E.C.U. This is, however, more a matter of earning the responsibility than one of technical expertise as it is relatively easy to operate; it only has four control components: de umbilical access lock, the entry grid activation button, the field neutronisation button, and the transferal lever (also see Benjamin & Sumerak, 2017, p. 54). 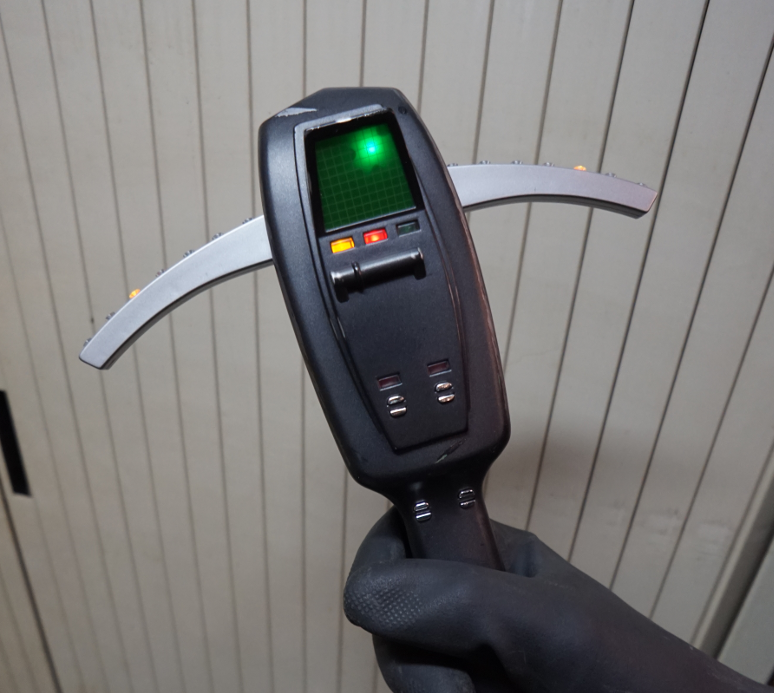 The abbreviation P.K.E. stands for PsychoKinetic Energy, and the PKE meter does exactly what the label says: measuring the amount of psychokinetic energy in the direct vicinity. In that sense, it functions as a metaphysical divining rod in the shape of a small box with a handle, a display, and two sensor wings that light up and protrude upward to each side if the meter detects an increase in psychokinetic energy. When the PKE meter is close to the source of the disturbance, the wings will have reached their maximum arc and the device's hum will have reached its maximum frequency and intensity as well (comparable to the characteristic 'warning' sound of a Geiger counter). The graphic interfaces assists in determining the distance and intensity of the entity's signal; it can determine (a) the density of the negatively charged particles, which enables the GBNL fieldworker to narrow down the category of the apparition that needs removing, (b) the speed with which the entity is moving or has moved—which in some cases can exceed 160 km/h—and (c) de speed of molecular decay that most, if not all, supernatural entities are subject to; in other words, how strong the apparition in question is: the lower the rate of molecular decay, the stronger the ghost! This is relevant for determining how easy or difficult it will be to combat the ghost with our proton packs and capture it.

The PKE meter can also be used to find out whether certain substances or objects have a supernatural origin.

Of all the tools at our disposal, the PKE meter is the oldest. It had been designed and built before Ghostbusters was founded, and had been used by Drs. Stantz, Spengler, and Venkman in their research at New York's Columbia University. 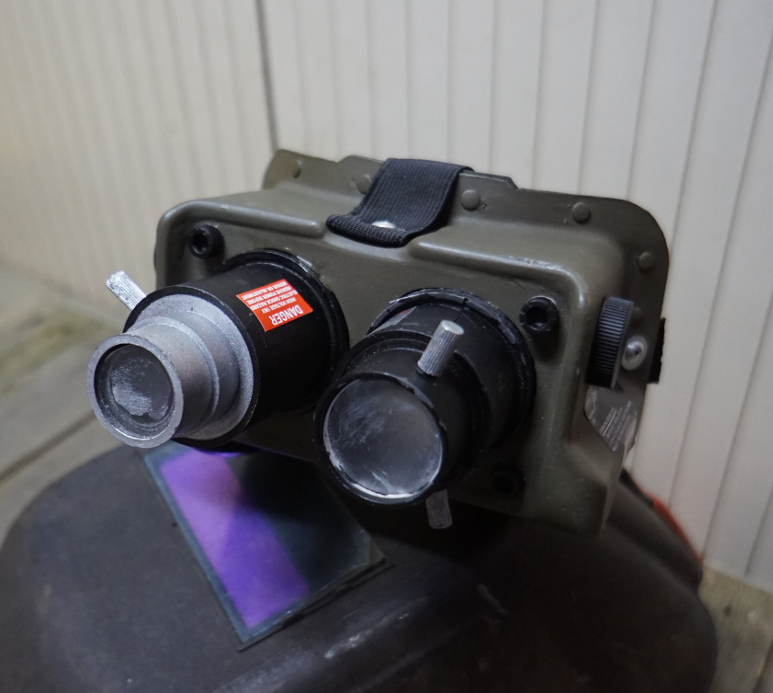 Essentially an extension of the PKE meter's functionality, the Ecto Goggles (also occasionally referred to as Paragoggles) is a pair of specially designed binoculars that can convert PKE data into visual information for the fieldworker, so that they may more easily localise and identify a supernatural entity (especially when the latter is invisible).

The Goggles, fitted with an adjustable headstrap in order to keep one's hands free, resemble (and are based on) a night visor, but this functionality has been extended with a special type of lens that can detect  psychokinetic energy and convert it to visual output that the wearer can access through the built-in HUD (heads-up display). Along with it, the HUD also offers extra data (such as PKE intensity) that may assist the fieldworker in classifying the apparition. 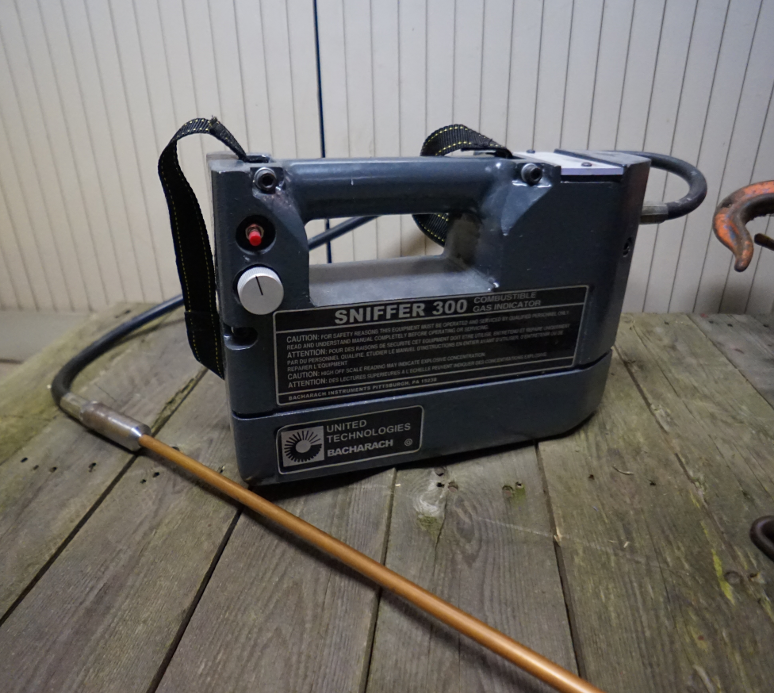 The Ghost Sniffer is a converted Bacharach 300 combustion analyser. A Ghostbusters fieldworker can use the Sniffer to filter spectral articles from the air in order to analyse them. Using a rubber hand-pump, air is drawn into the Sniffer via an antenna-shaped tube. These air samples can then be analysed more easily with an eye on, for instance, pressure or density, atmospheric deviations, and paranormal particles, of course. Whereas the PKE meter can merely take general measurements of the amount of psychokinetic energy, the Ghost Sniffer can provide us with much more detailed information about locations that appear to exhibit supernatural activity. 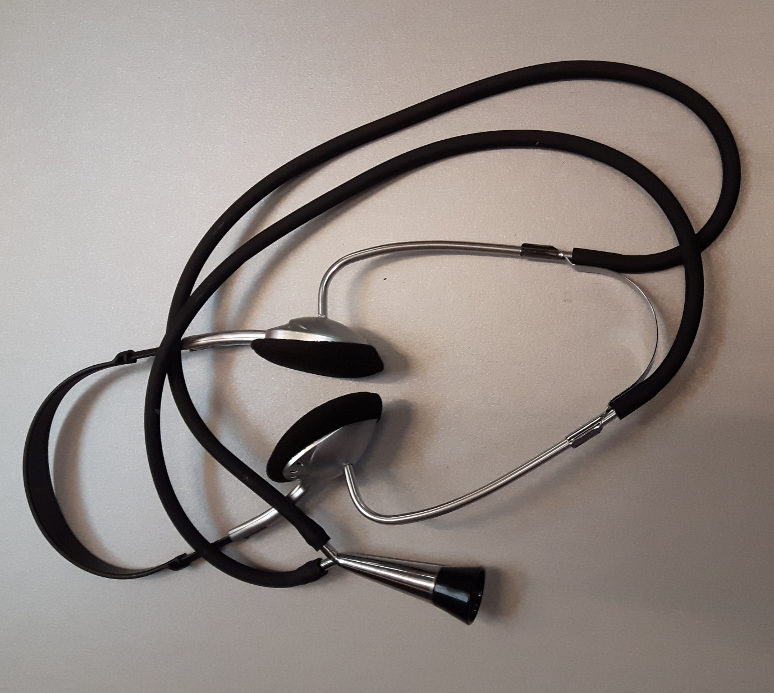 Like the P.K.E. meter, the S.V.M. (Spectral Voice Manifestations) stethoscope has been in active use since before the foundation of Ghostbusters in the early eighties of the previous century. This modified version of the standard, medical stethoscope is used for psychoauscultation, in other words, the detection of psychokinetic-auditive signals in creatures or objects. The most significant difference compared to a normal stethoscope is brought about by two internal circumambient Szalay-Raudive compensators. Occasionally used in conjunction with research into Electric Voice Phenomena. 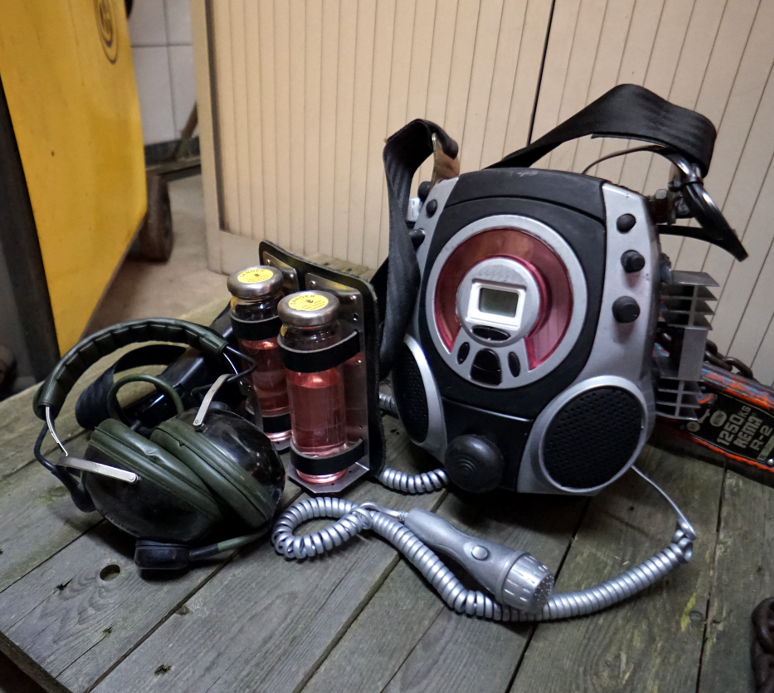 The Mobile Psychomagnotheric Ectoplasmic Charger 2000—or MPEC-2000 for short—is a device that was developed in our own R&D laboratory. It can charge ectoplasm into a psychoreactive state by means of human emotional input; an experimental application continuing Drs. Spengler and Stanz’s earlier research on psychomagnotheric slime (usually referred to simply as ‘mood slime’). The kinetic-energy potential created through controlled slime charging has immense practical value in our business. The MPEC-2000 alternates ‘injections’ of positive and negative emotions into small quantities of psychomagnotheric slime; these injections condition the slime into absorbing emotional energy faster. This way, the MPEC ensures that ‘prepped’ slime will be able to transfer its characteristics onto large quantities of slime more easily than ‘untrained’ slime would.

We also often bring the MPEC-2000 to public events such as conventions. These venues often bring us good results because of the significant goodwill and enthusiasm displayed by the average visitor. However, cases where the mere presence of the MPEC-2000 has triggered aggression, irritation, or other related forms of negative emotion have also proven to be more than welcome, scientifically speaking. 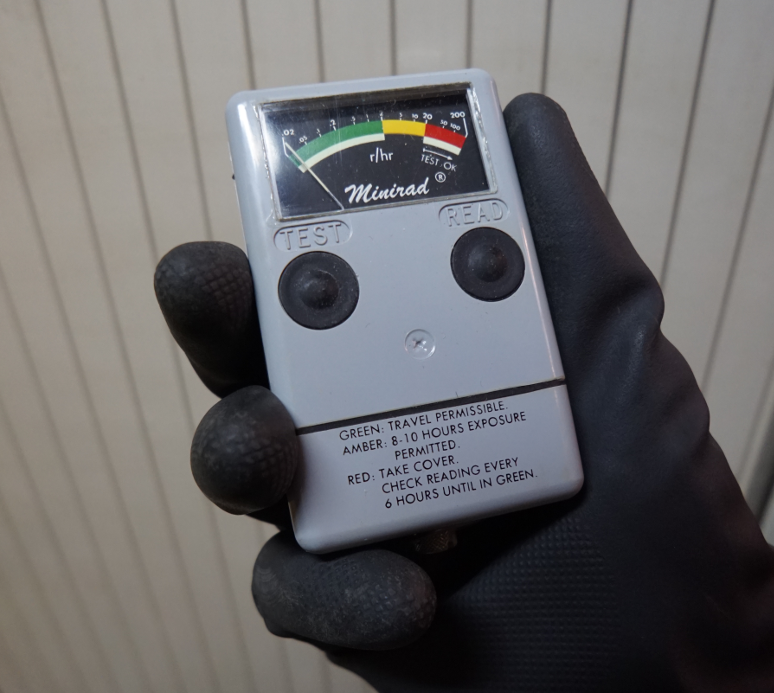 In some extreme cases, such as certain Class-VII spirits (e.g. particular demons or demigods), the usual paraphysical phenomena may be accompanied by more conventional physical phenomena, like gamma radiation, which is typically considered a dangerous  form of radiation.

For such situations, we make use of an IM-179 Gamma Rate Meter although we usually simply refer to it as the 'Rad Meter'.